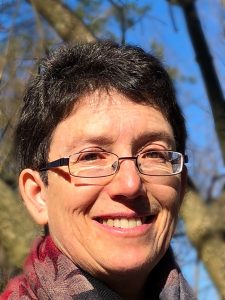 My fields of teaching and research interest are early-modern poetry and drama (especially in England, and especially Shakespeare and Milton); adaptation studies; the history of material texts; intersections of media philosophy and literary study; and genre studies. My recent work on these topics has taken me into ecocriticism, digital humanities, and translation theory as well.

My current major project considers the long history of media change and its impact on literary form. This book explores how John Milton’s representation of Eve – and later writers’ adaptations of Milton’s Eve – engages these issues. Forthcoming articles include “Media, Mediation, and Milton’s Eve” (in Milton Today, a special issue of Milton Studies (62.2) and “The Idea of the Interface and Shakespeare’s Cymbeline” (The Routledge Companion to the Interface, ed. Paul Budra and Clifford Werier).

I am Subject Editor for Literature and Drama in English for the Routledge Encyclopedia of the Renaissance World, a digital project that will go live next year. I recently have edited the collections Temporality, Genre, and Experience in the Age of Shakespeare: Forms of Time (Bloomsbury/Arden, 2018), and (with Kristen Poole) Gathering Force: British Literature in Transition 1557-1623 (Cambridge University Press, 2019).

In the past few years,  I’ve written on human-non-human networks in Renaissance pastoral, the power of poetic forms at English Renaissance courts, early-modern women’s elegy, Philip Pullman’s His Dark Materials in relation to Paradise Lost, “YouTube and the Idea of an Archive,” and patriarchy in both Shakespeare’s Macbeth and its box-office-movie adaptation Scotland, PA. My book Reading Masques: the English Masque and Public Culture in the Seventeenth Century was published by Oxford University Press in 2010.

Having studied harpsichord performance and comparative literature as an undergraduate (Oberlin College BA 1986, B.Mus. 1987), I received my graduate degrees in English from Brown University (MA 1992, Ph.D. 1995). My work has been supported by fellowships from the National Endowment for the Humanities, the Shakespeare Association of America, the Folger Shakespeare Library, the Huntington Library, the Bogliasco Foundation for Humanistic Study, the German Academic Exchange Service, the Freiburg Institute for Advanced Studies, and the Woodrow Wilson Foundation. I was the first holder of Villanova’s endowed Luckow Family Professorship in English.

I’m drawn to study and teach literature because it sponsors conversations: between the present and the past, between forms (like sonnets) and historical events (like revolutions), between scholarly analysis and popular debate, between selves and others, between “what” and “what if.” I find our present moment of rapid technological and cultural change both baffling and exciting, and I am interested in exploring ways that canonical texts of English literature and well honed tools of literary analysis can offer archives, tool boxes, and inspirations for considering vital questions confronting us today.